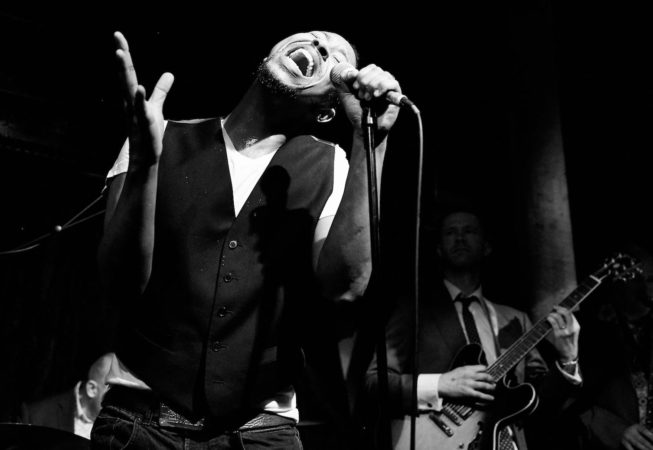 Experience the incredible sound of Otis Redding’s music as two of the UK’s most exciting raw soul acts join forces to mark 50 years since his untimely death.

You’ll hear 20 Otis Redding classics – including hits such as Respect, My Girl, Mr Pitiful, Hard To Handle, Love Man, and Try A Little Tenderness – performed by an 8 piece band with an incredible raw sound that’s guaranteed to get you on the good foot!

This show has earned a fanatical following in the UK and also toured internationally, selling out some of the world’s top music venues numerous times. Recent London performances include The Jazz Cafe, 100 Club, The Hideaway Club, and The Boisdale Club; Band On the Wall in Manchester; The Stables in Milton Keynes; Chapel Arts Centre in Bath; Sage 2 in Gateshead. Festival bookings include Saint Paul Soul Jazz Festival; Roubaix Vintage Weekender; Tighten Up Festival in Marseille; and Grand Casino Soulstice Party in Nice.

Burundian singer songwriter Mudibu grew up with a heartfelt love of 1960s soul and RnB and voice to match. He’s performed all over Europe and Africa and his six track EP Slow Me was released on Akazi Records in 2008. Mudibu’s new album Inzatsa (Fireflies) is out now.

With over 10 years experience on the live circuit, The Jezebel Sextet has toured with singers Sir Joe Quarterman, Rev Chunky, and Randa and the Soul Kingdom, played all over Europe, been broadcast on BBC 6 music, and appeared twice on London’s LBC radio. They appear on Freestyle Records’ Fresh Out The Box compilation and released their debut album Lift It Up in 2012 produced by Leigh Gracie.